It seems like users are ignoring the warning message that Pokémon GO gives about playing while driving.

The data was collected by first collecting 350,000 tweets that referenced Pokémon in one way or another. Then, the data set was categorized into groups that included a driver, passenger, or pedestrian playing the game, whether the tweet included a safety message, or if it didn’t reference Pokémon GO at all.

In their findings, 18% of the data displayed how drivers were playing the game while driving (including tweets such as “omg I’m catching Pokémon and driving”), as well as another 4% – 13,000 tweets – stating how they were dangerously distracted while playing the game (pedestrian tweets included “almost got hit by a car playing Pokémon GO.” Additionally, another 11% of the tweet sample involved a passenger playing the game, however whether that is a distraction for the driver can be disputed.

Here are just some of the examples of tweets from people playing Pokémon GO while driving (note: these are examples outside the study sample).

Ok, hands up if you play Pokemon Go and now drive everywhere at 12mph

me, going on a road trip: honey yes i know how to drive there i got GPS i dont need "directions"
[ pulls out pokemon go ]

While Pokémon GO is up, a prompt will display on the screen if your speed passes a certain limit while your character is “walking”. This will typically display when one is moving too fast while the app is running, such as when in a motor vehicle. The prompt can be bypassed by identifying yourself as a passenger instead of as the driver. However, there is no system in place for a driver to prove that they are a passenger in a car, thus making the prompt easy to bypass. The warning can be seen here: 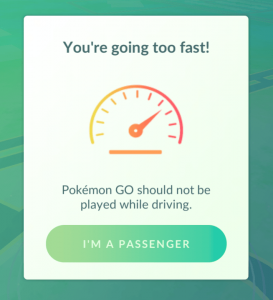 It’s also worth noting that these tweets could be made for the sole cause of obtaining likes/retweets. However, it is still a matter for concern as two-thirds of crashes among young drivers is from a distraction, with that rate increasing. There have also been incidents in the past where Pokémon GO was the main cause for the crash.

Should Pokémon GO be a cause for concern when it comes to playing it while driving? Give us your view on the matter through the comment section.

Edited by bobandbill and Charlie Brown.