With five of Sun and Moon’s Pokémon, the three starter Pokémon and two legendary mascots having now been revealed, fans of the series the world over are already theorising about the potential secondary types of the starter’s evolutions and the typing of each legendary.

Many fans have been putting in a lot of extra effort to try and weasel out the truth from the little amount of information we have currently been provided with. In particular, the creator of this video went above and beyond in his efforts to find out more about the currently revealed Pokémon. He might have found something too!

We know of course that the Alola region’s Starters, Rowlet, Litten and Popplio are Grass/Flying, Fire and Water-typed respectively. However evolutions in the Pokémon series often gain new typings in addition to their old one, and in some cases even change one typing altogether. Keeping this in mind, the intrepid Youtuber from the video looked for information hidden deep in the official Sun and Moon website’s source code. What he found was that in addition to the typing information for Rowlet, Litten and Popplio (the only Pokémon whose types are currently revealed on the site) the source code also included the unseen labels for the Ground and Fighting types. Together with the revealed types, six typings were listed in the sequence of Grass, Flying, Ground, Fire, Water and Fighting. 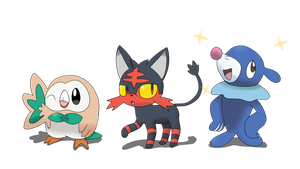 From this information the creator of the video determined that as Rowlet already possessed a dual typing (Grass/Flying) it was probable that due to the typing’s placement that Litten would evolve to become Fire/Ground-typed whilst Popplio would become Water/Fighting. These typing would make a lot of sense if we were correct in our previous assumptions that Litten is based of of the Iriomote cat which lives in mountainous habitat and that Popplio is inspired by the monk seal and performing seals/sea-lions.

Something interesting is also visible from the order the types are listed in however. Rather than Ground coming after Fire (as an additional type generally would in the series) it is listed before it. This provides us with the intriguing possibility that Litten’s evolutions will not gain any types at all and that Rowlet could potentially lose its Flying typing and gain the Ground type instead. This would certainly be a surprising first for a Starter Pokémon!

A third option also presents itself, although this one may be sadder to consider for some. There’s always the possibility that the Ground and Fighting types mentioned in the code are completely unrelated to the Alola Starters. In this case, the presence of the typings in the code could mean we will soon have a Ground and a Fighting type (or a Pokémon with a Ground/Fighting dual type) revealed instead.

Much harder to speculate about are the legendary mascots of the seventh generation. Pokémon in the form of a majestic lion-like creature and a mysterious bat-like entity. The only clues so far to the types of the yet unnamed Pokémon are in their designs and their ties to the sun and moon. Sun’s mascot, a regal, lionesque Pokémon with a white, gold and red colour scheme and fabulous sun-shaped mane seems likely to be yet another fire-typed feline. Pokémon associated with the sun typically are Fire or Grass-typed or learn many Fire-typed moves such as Solrock or Groudon (before it’s Primal Reversion). Since this Pokémon is very clearly not a Grass type, it seems that there’s really only one conclusion to be made at this point. Our mysterious bat legendary with crescent wings and horns and full moon-like white patch on its sternum has a few more potential options. As it possesses enormous wings, no hands and no legs, it is almost certain that this Pokémon will be at least partially Flying-typed. It may well also possess the Dark or Fairy types as a secondary typing however, as unlike Flying, these types are both heavily associated with night time and/or the moon. It’s enigmatic appearance and colour scheme could also potentially suggest a Psychic typing. 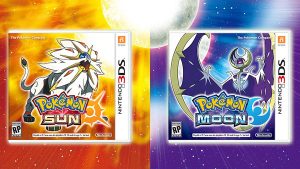 Only one thing is for sure, and that’s that we don’t know anything with a certainty. There might be clues hidden in designs, inspirations or source code but we could also be way off in our assumptions and investigations. However, with more news on the way on the second of June, we might soon find out a little bit more and maybe even confirm some of our suspicions.